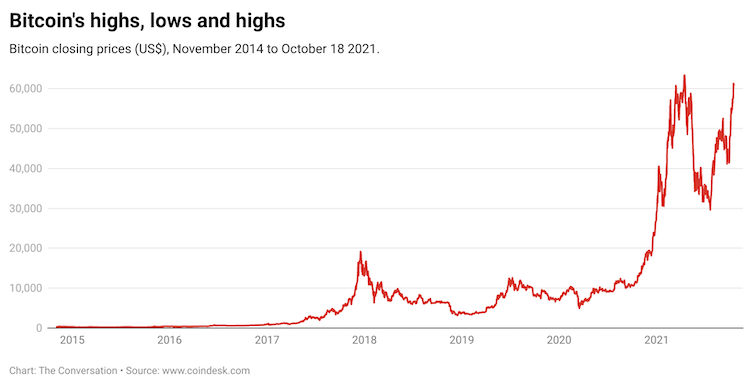 The Bitcoin bulls are racing again. A year ago the cryptocurrency was valued at less than US$12,000. Now it has passed the symbolic milestone of US$60,000, nudging the US$63,255 record it reached in mid-April, before its price fell to as low as US$30,000 in July.

Bitcoin’s rally over the past month is largely attributed to speculation the US Securities and Exchange Commission is poised to approve an exchange-traded fund, or ETF, based on Bitcoin futures.

So what is an ETF, and why does this matter to the value of Bitcoin?

CC BY-SA How does an ETF work? An exchange-traded fund is an investment fund, comprising a pool of assets, traded on a stock exchange. The general attraction is that an ETF offers individual investors the benefits of diversification, protection and liquidity. Suppose, for example, you want to invest $100,000 in commercial property. You can’t afford to buy an office building or a shopping centre by yourself – and, even if you could, buying just one building would be putting all your eggs in one basket. Here’s where a funds manager with an ETF can help. The manager buys a number of office buildings and shopping centres across a range of locations. Suppose these assets cost $100 million. These are “bundled” into a fund with 1,000 units sold for $100,000 each. It’s like buying a share in a company. It allows you, the investor, to avoid the exposure that comes from buying a single asset. Instead, you get a share of a diversified portfolio. If the value of the portfolio rises, so does the value of your unit. If you want your money – to liquidate your asset by selling it – this is easy to do because the fund’s units are traded on an exchange. An ETF is also regulated. This protects you from some of the risks (such as fraud) that come from buying assets directly.

Salvadorans protest against Bitcoin in September 2021, after El Salvador became the first nation to make the cryptocurrency legal tender, obliging businesses to accept it for payments. Rodrigo Sura/EPA How funds are managed Rather than physical assets (as in our example), many ETFs hold securities such as stocks and bonds or derivatives. These funds can be either passively or actively managed. Passively managed funds, which are the most prevalent, hold a basket of assets that track the market, or a market segment. An “index fund”, for example, holds shares in proportion to their weight in a stockmarket index such as the Standard & Poor’s 500 Index. If a company makes up 5% of the index’s value, the manager will ensure its share makes up 5% of the fund. Actively managed funds, by contrast, hold more shares whose price the fund manager expects to rise strongly, and fewer or no shares they expect to perform poorly. Whether the return on these funds exceeds those delivered by passive funds depends on whether the fund managers’ judgement (or luck) is better than that of the market as a whole. What has this got to do with Bitcoin? A Bitcoin-based ETF is seen as something that will entice more investors to gamble on cryptocurrency. Buying Bitcoin or other cryptocurrencies directly can be fraught. Forget your private key (the equivalent of a password or PIN) and you lose it all. There is no friendly local bank manager who can retrieve or reset a password or make good your loss. Scams are also on the rise. In the US alone, more than 81,000 cases of fraud were reported in 2020. So bundling up cryptocurrencies into products overseen by traditional funds managers and regulators can be seen to have advantages, bringing greater respectability to cryptocurrency trading. (So long as you aren’t bothered by that being the antithesis of the decentralised and distributed ideals that drove techno-libertarians to create cryptocurrencies in the first place.) Read more: China’s digital currency could be the future of money – but does it threaten global stability? Beware another bubble But while investing in cryptocurrencies through an ETF brings a number of safeguards, it does not reduce the market risk. An indirect gamble is still a gamble. Indeed an ETF of Bitcoin futures isn’t even indirect ownership of a pool of bitcoins. It’s a pool of contracts about bets on the future price of the cryptocurrency. If this sounds a bit like the complicated derivatives known as collateralised debt obligations that led to the Global Financial Crisis in 2008, you’d be right. The more complex the financial instruments become, the more dangerous they may be. Read more: Vital Signs: swaps, options and other derivatives aren't just for the financial elite One of the few who who predicted the collapse of that market was hedge fund manager Michael Burry (portrayed by Christian Bale in the 2015 movie The Big Short). Last week he effectively warned that cryptocurrencies are a speculative bubble. This is a view shared by most economists and business leaders. As with all bubbles, some will make fortunes, but many will lose. Take care.