“Working at an Amazon warehouse is no easy thing. The shifts are long. The pace is super-fast. You are constantly being watched and monitored. They seem to think you are just another machine.”

So testified Jennifer Bates before a US Senate Budget Committee hearing into income and wealth inequality on March 17. Less than a month later her co-workers at Amazon’s fulfilment centre in Bessemer, Alabama, voted 1,798 to 738 against allowing the Retail, Wholesale and Department Stores Union into their workplace to represent them.

That might seem a surprising outcome. But Bates’s testimony hinted at the odds of workers voting against the company’s wishes – which was heavily anti-union:

They track our every move – if your computer isn’t scanning, you get charged with being “time off task”. From the onset I learned that if I worked too slow or had too much time off task, I could be disciplined or even fired.

That is, employees at Amazon knew they were under constant surveillance, and also that the company had a history of sacking those who were pro-union.

Jennifer Bates testifies before the Senate committee on March 17 2021.

Bates, 48, got a job at the Bessemer facility in May 2020, two months after it opened. The warehouse is the size of 16 American football fields. About 5,800 people are employed there.

Shocked by the conditions, she and a few other coworkers finally contacted the union. From this grew the campaign to become the first Amazon workplace in the US to unionise.

The campaign ended in a resounding defeat for the union. But that’s because the US has unusual unionisation laws compared to the most other industrialised and democratic nations.

American law requires that more than 50% of workers at a workplace vote for a union for it to be recognised as their bargaining agent.

In other countries workers decide for themselves if they want to join a union. Nor are unions prevented from bargaining for members if they represent less than half the workforce.

In Italy, for example, union laws required Amazon to negotiate with the union (FILCAMS CGIL) regardless of the number of members at the company’s warehouse. In Australia, a union has the right to bargain with just a single member in a workplace. 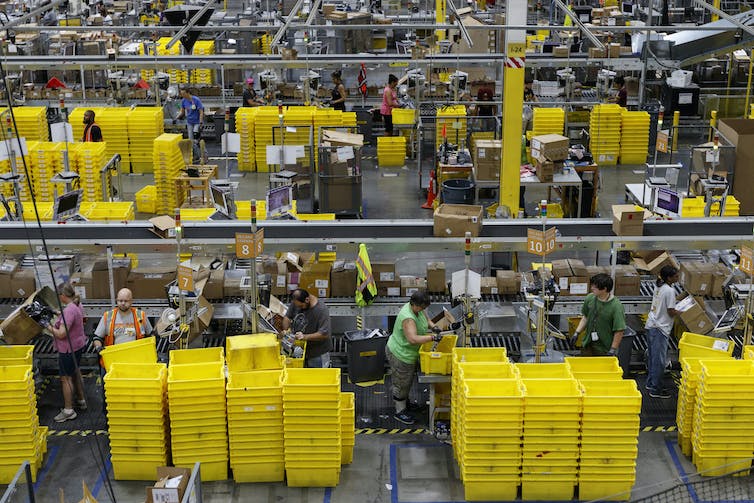 The “all-in” union law dates from 1935 when President Franklin Roosevelt created the National Labor Relations Board as an umpire to oversee collective bargaining efforts. It wasn’t meant to impede unions, but over time employers have used their resources and advantages to turn it into a barrier to unions.

In Bessemer, blocking union officials from coming on site was just one of Amazon’s advantages. 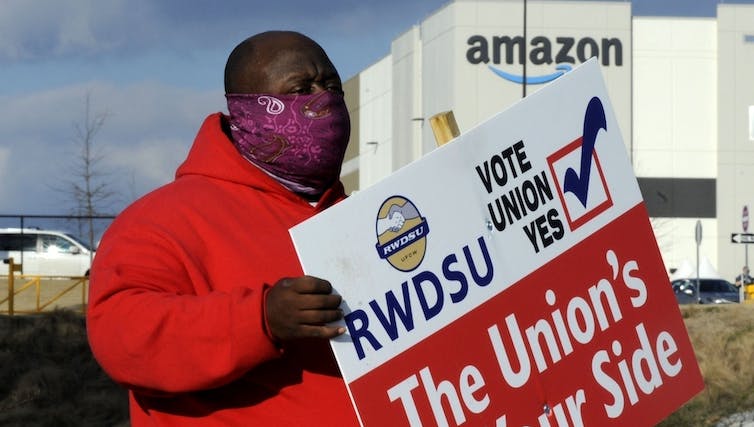 Michael Foster, of the Retail, Wholesale and Department Store Union, campaigns for the union outside Amazon’s warehouse in Bessemer, Alabama, on March 29 2021. Jay Reeves/AP

Internally the company ran an incessant anti-union campaign. Anti-union messages were sent to workers’ mobile phones and were even fixed to the back of toilet stalls. Jennifer Bates again:

We were forced into what they call ‘union education’ meetings. We had no choice but to attend them, not given an opportunity to decline […] They would last for as much as an hour, and we’d have to go sometimes several times a week.

The company also has a long history of surveilling its workers. Any employee expressing union sympathies on social media risked being identified by the “spooks” the company pays to monitor their activities outside of work. 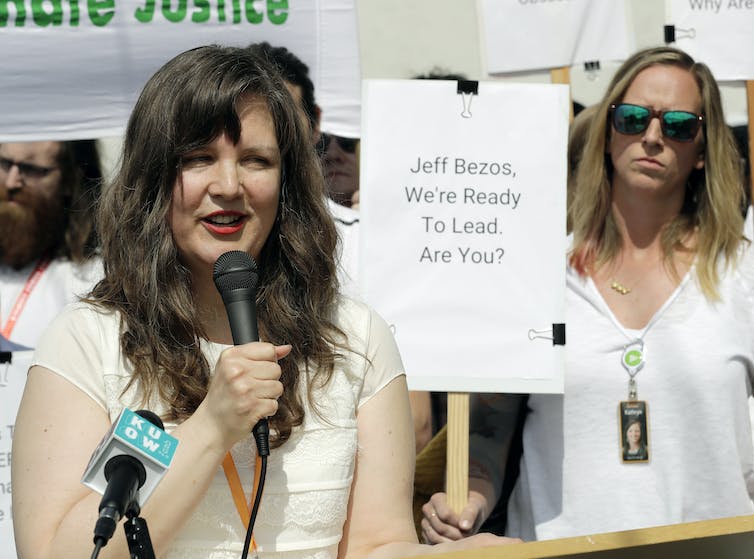 Amazon fired Emily Cunningham, left, and Kathryn Dellinger in 2020 for publicly criticising its lack of action on climate change and not doing enough to protect warehouse workers from COVID-19. The National Labor Relations Board has ruled their firing was illegal. Ted S. Warren/AP

In the early 1980s, 20% of American workers were union members; now just 11% are. But the percentage of non-unionised workers who would vote to join one if they could has grown from from 33% to 48%.

That means there’s more support for unions now than ever. There is a clear need for law reform to address the growing gap between the number of workers who want to be in a union and the number who actually are.

US President Joe Biden has signalled support for such reform. On March 1, his official Twitter account said of Amazon’s Alabama workers voting to unionise:

It’s a vitally important choice – one that should be made without intimidation or threats by employers. Every worker should have a free and fair choice to join a union.

Twitter A bill that would help level the playing field is awaiting a vote in the US Senate. Co-sponsored by Democrat Representative Robert Cortez Scott (California) and Senator Patty Murray (Washington), the Protecting the Right to Organize (PRO) Act would: allow unions to collect bargaining fees from non-members, thereby avoiding the need to win a majority in a workplace election in order to bargain ban company-sponsored meetings to discourage union organising prevent retaliatory firing of union activists. If the bill passes the Senate, Biden has said he will sign it into law. Biden also has the ability to alter union election regulations at the US Department of Labor once its new leadership is confirmed. On the campaign trail, he promised that employers overstepping the mark in opposing unions (as nearly half do) would be pursued and punished with multi-year debarment from receiving federal contracts. These changes could mark a turning point for the union movement – and the millions of workers who, like Jennifer Bates, think there should be another way. 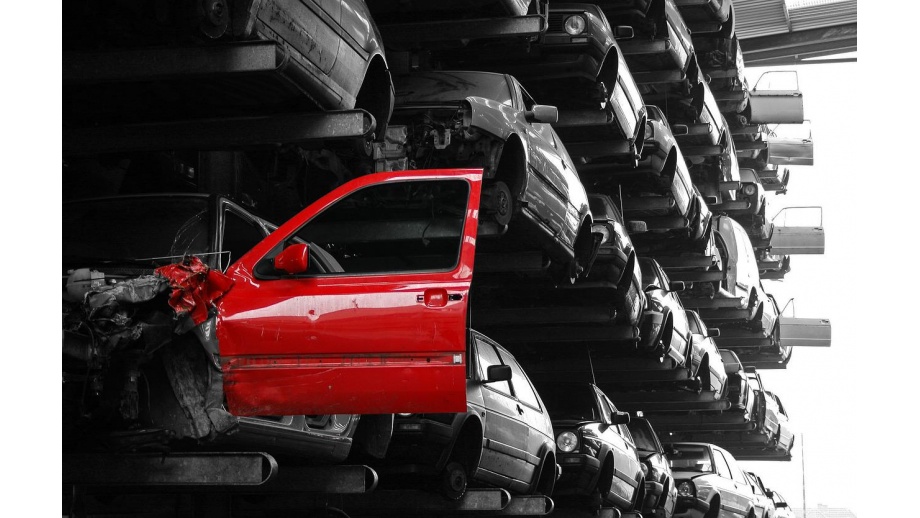